The Pagani Limited offers hydrotherapy jets configured to provide hot tub massage for all parts of the body, and seating designed to accommodate individuals, families, or even social gatherings with ease. Barefoot Spas has taken all the desirable features of a full-size hot tub and integrated them harmoniously into this mid-size spa.

For a spa or swim-spa order, there are 3 types of delivery, depending on your site and needs. Drop-Ship, Placement, and Non-Standard Placement.

Drop-ship: Included with the purchase for no additional charge, the spa will be delivered to the front of your residence and you coordinate the placement to its final destination on your property. This is also known as a "curbside" delivery.

Upgraded Placement: Barefoot Spas will coordinate the placement of the spa where you want it at your residence for an additional charge. Eligibility to be determined based on proper access and geographic location.

Non-Standard Placement: Barefoot Spas will coordinate the placement of the spa, but your circumstances require special accommodations such as a forklift or crane service.

All orders (including orders for parts and accessories) may be shipped using a common shipping carrier if appropriate for the item, tracking information will be provided at the time of shipment.

Thank you for submitting a review!

Your input is very much appreciated. Share it with your friends so they can enjoy it too! 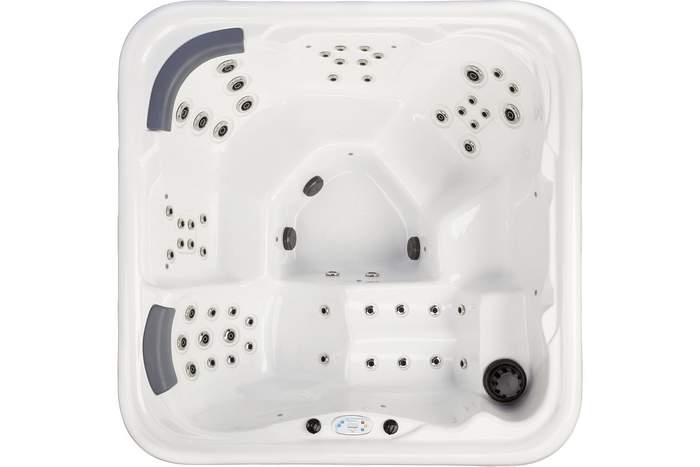 I love my tub but I didn’t love the purchasing experience. There is a pathetic excuse for a user manual. I had never owned a hot tub and spent a month getting water balanced correctly. After I spent lots of money on chemicals and got it right it’s needed nearly no maintenance. A good owners manual would have given this a 5 star review. Just be prepared, if you buy this tub the entire start up process and chemical treatments will be yours to figure out.

Great spa overall. So, my only issue is the cheap plastic clip to hold my filter in place. Now my filter bobs up and down and won’t lock into place without this piece of plastic that’s gone.

We purchased this spa at a blowout sale to replace a 30 yr old one on our deck that is 9' off the ground. We liked that delivery was not for a couple of months as it gave me time to get ready for it. After I read some of the reviews, I started to get concerned but the transaction was smooth, delivery was early, and Walter and his crew are a nice gem as they placed it right on our deck as needed. We love it and have lots of spa experience. The spa was clearly tested at the factory as it still had water in some of its lines, I was happy to see this. It started flawlessly and has worked well for 2 weeks so far. Now the realities- Any sort of communication with the factory after your sale is difficult. Don't expect any sort of hand holding or updates. Our Spa was built May 5 and we took delivery about 2 weeks later. Swim spa manufacturers generally don't provide a lot of insulation. Our spa is minimally insulated. I accepted this as a trade since they placed it on our deck and I can insulate it better before winter, but I can;t place it on the deck. If you live north of maybe Maryland, you will have to consider more insulation on the spa if it is outside., Barefoot acknowledges that they are using 20 yr old molds and designs. They don't seem to provide any wifi control access, or speakers. I am ok with this as I view it as just something else to break, but it is more important to others. I do wish that they would provide guidance on how best to better insulate the tub, but that would be admitting that it needs it. It would be great of they would provide a youtube video that discusses additional insulation. I will something before fall.

I sink in to my barefoot spa and all my worries melt away. Stress relief and relaxation is an understatement. We enjoy this hot tub very much. Just simply a great product and excellent service.